Has found it impossible to carry the heavy burden of responsibility and to discharge his duties as Foreign Minister as he would wish to do without the help and support of the woman he loathes. 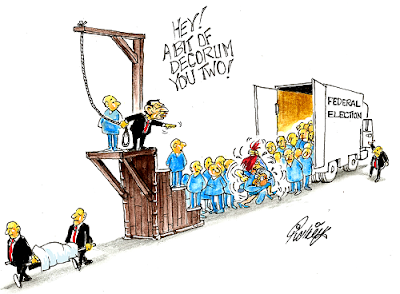 Since the rolling of Kevin Rudd as Prime Minister it has been obvious that he had ambitions of regaining that position. After the way he was dispatched in a backroom coup he has clearly been smarting at his treatment but in the meantime has acted capably as Foreign Minister, one of the few effective people in cabinet.

There is nothing inherently wrong in a politician harboring leadership aspirations although current leaders tend to feel differently on the subject. The press like to play this angle with gotcha questions which, if the answer is “yes” indicates leadership tensions’ and if “no” indicates a lack of ambition, so most MPs tend to avoid direct answers.

The problem Labor has is that with their increasing incompetence, inherent dishonesty, and dependence on a motley mob of independents and Greens for their continued survival, Labor’s stocks have plummeted. This has in turn led to a public and backbench with a growing nostalgia for the good old days under the controlling and vitriolic leadership of Rudd, an example of which was leaked as an opening shot at him as he left for the US:


While he has been away, the tone of the attacks has steadily grown from random, through a fever pitch till they reached a crescendo today with several frontbenchers taking it in turns to demand he stand down. In a surprise move, he has obliged, citing his inability to carry out his responsibilities without the support of the Prime Minister.

“The truth is I can only serve as Foreign Minister if I have the confidence of Prime Minister Gillard and her senior ministers. “In recent days Mr (Simon) Crean and a number of other faceless men have publicly attacked my integrity and therefore my fitness to serve as a minister in the government.”

“When challenged today on these attacks Prime Minister Gillard chose not to repudiate them. “I can only reluctantly conclude that she therefore shares these views.”

Australia must be governed by the people, not party factions,” Mr Rudd said. “I promise you this - there is no way, no way, that I will ever be part of a stealth attack on a sitting prime minister elected by the people,” he said.

This may have been yet another a major miscalculation by Gillard. By quitting the ministry and reverting to the backbench, Rudd gains a lot more freedom of movement by not being bound by the expectation of cabinet solidarity. Effectively he has reversed the ‘new paradigm’ with Gillard now the one on the defense.

The government has virtually declared a leadership spill for Monday, which cannot be avoided without making the PM look weak. Rudd has the option of challenging or leaving it till later. This action though has unsettled the backbench to the point where Rudd has probably gained considerable numbers from his losing position of yesterday.

There is a fair chance that were Rudd to challenge, he may still lose, but the margin would be such that Gillard is mortally wounded. 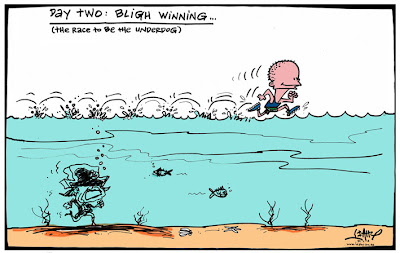 Throughout the last few decades Labor, despite having its ups and downs has generally been able to present reasonable candidates who have been respected in their local communities, even in ‘safe’ Liberal or National Party seats. Even in the 1974 Queensland election, where the party was on a disaster to nothing, the quality of candidates did not decline.

In that election the party was smashed to the point where they were left with a ‘cricket team’ of eleven members and faced a desolate future. Despite this setback they were able to muster a full field of candidates in 1977 and win back some of their losses, but were still well short of anything short of a rump in parliament. It would take another eleven years of effort to attain government.

The problem Labor faces now is, that party members are so demoralized over the machinations of the state and federal governments, that many branches are unable to come up with any credible local people who are prepared to nominate. In this election they have been reduced to recruiting university students and kids to stand in some seats. Locals have given up hope even in seats they lost narrowly last time.

Queensland Labor's candidates controversy has deepened, with the party telling voters there's nothing wrong with offering up uni students who don't live in their chosen electorates.

Brisbane student Jack O'Brien, 20, is contesting the rural conservative stronghold of Gregory and confessed on Wednesday he has never been to the electorate, and won't have time to before polling day. Brisbane-based Rachel Patterson, 19, is studying, works in a fast-food outlet and is also the ALP's candidate for Mermaid Waters. Ben Parker, 18, a union official, lives on the Gold Coast and is running for the seat of Gympie. …

Deputy Opposition Leader Tim Nicholls said the LNP's candidates all had strong links and connections with their local communities, while Labor was treating voters with contempt. "The last-minute decision to parachute university students from Brisbane into seats 1000 kilometres away shows just how city-centric they are," he told AAP. …

(Meanwhile) Perhaps this goes part of the way to explaining the disillusionment in the ranks.