If this doesn’t piss you off you are on the wrong site.

A tale of Three Presidents.

I am heading off for another swing at work tomorrow so I'll not be online for a while. I am leaving this for your amusement, courtesy of an Email I received. As a working man I can leave it up to you to figure out which two I prefer and which one I have little time for. 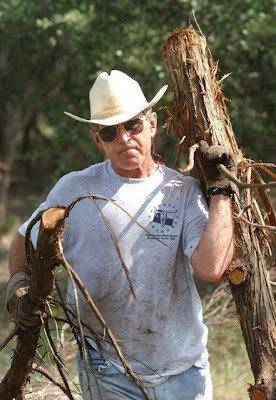 We start with W. 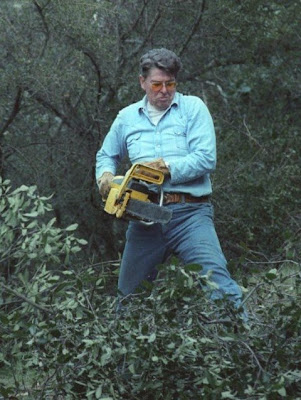 Then we have an action shot of Reagan. 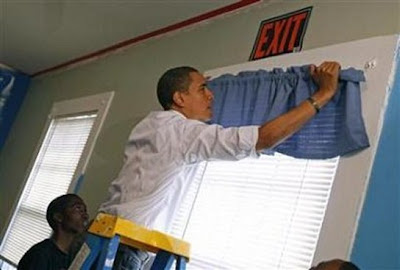 Then the not so outdoors  type.

This video starts as commentary on torture and Pelosi, but after the first couple of minutes goes onto Paul’s 2003 prediction of the current situation.

I generally get in the shit with Paulists when I comment on him, however I have great respect for him on economic issues. He starts to lose me however when he apes the lefts crap about empire. The US is not an empire and not likely to ever become one. I agree with him on many of the cuts he proposes but in the current situation defense would not be one of them.

I would however try to aim first at cutting the size and scope of those departments rather than their immediate abolition, which Paul aims for. I believe much of what he claims can be eliminated, can be and should be eliminated, but to insist on doing so immediately is will pretty much guarantee the election of those who will build them up. They should be wound back as quickly as possible and ultimately abolished, and we can get there and maybe even further than Ron envisages now, but we have to use language we can win with to have a chance. 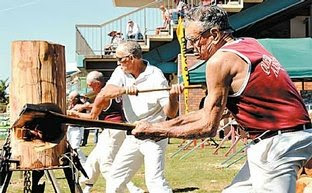 Vic Summers (foreground) on the way to winning his first heat at the Gympie Show. (From Gympie Times)

Vic Summers must be one of the most retiring guys I know, it seems that every time I have spoken to him over the last 20 years or so he is retiring from competition in wood chopping. This year is no exception although he has left it a little open, stating that he might keep going if he wins, and he won the Veterans Standing H/cp.

Vic was a world champion and a legend of the sport when I was knee high to a grasshopper, and is still a great competitor at the age of 90, although less well known outside the sport. Handicapping seems to be a feature of these competitions, and he always seemed to be the last one starting, even to the point where some of the competitors would be well into the other side of their block before he was allowed to strike a blow, and he would still give them a run for their money.

I hope to see him there next year, I am betting he will have a go. Unless he stops enjoying the sport, or can’t compete to his own satisfaction, I think he should keep going after all it would be a shame to toss away about 80 years of experience.

I have commented before on the habit of the Labor Party of giving helpful advice to those who have no interest in it, and this is no exception. The Finance Minister, Lindsay Tanner seems to be so disappointed at not having the chance to go toe to toe with the former Treasurer Peter Costello, he wants him disqualified from the leadership of the Liberal Party.

Peter Costello should be disqualified from ever taking on the Liberal leadership, Finance Minister Lindsay Tanner says.

Speculation about the former treasurer's ambitions flared again last week after the government accused him of launching a personal website to coincide with the federal budget.

The former treasurer should be barred from the leadership because he didn't step up when the party needed him most, Mr Tanner said.

He did not have the "intestinal fortitude" to lead the party after the election loss.

"(And) what he's trying to do now is let (opposition leader) Malcolm Turnbull do all the hard yards in the hope that he, Peter Costello, can just cruise in at the last moment and take all the glory," Mr Tanner told Network Ten.

"I think that disqualifies him from any ambition to lead the nation."

Former PM John Howard made a comment yesterday and was accused of being the defacto leader of the Liberals by the same people who would without doubt adopt the same tactics against Costello if he stepped up to the plate in order to fuel leadership speculation and destabilize the opposition.

If Labor are concerned about leadership they should look to their own. Rudd claims that it is responsible to borrow unprecedented amounts of money and splurge it, even maintaining that it is “In the National interest.” Apparently the national interest consists of making Kevvy popular among those receiving all those $900 checks and keeping him in power.

Most politicians tend to be a little confused about what constitutes their own interests and what are those of the nation.

Meanwhile in Qld Anna Bligh has put aside her former outrage at John Howards concept of core and non-core promises, and adapted it to “Some guarantees are more important than others.”

This of course applies to such promises as “No new taxes,” made a few weeks ago in the lead up to the election which she claimed was necessary as she was the only all knowing person who could lead us out of the recession.

Funny how quickly things change after an election. 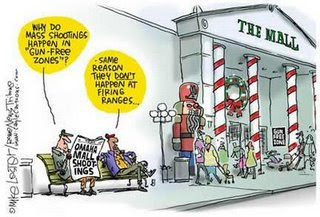 "The problem is not that we have too many fools, it's that the lightning isn't distributed right." .......  Mark Twain.

The above site linked to a great article from the Kentucky Coalition to Carry Concealed called “40 Reasons For Gun Control.” This was in turn excerpted from an article by Michael Z. Williamson, called "It's amazing what one has to believe to believe in gun control," which unfortunately seems to have been deleted.

One of the most difficult things about arguing for gun ownership in modern times is the incredible naivety of many of the supporters of gun control fostered by those who seriously promote this idea. The core promoters are those who seem to believe that the state should be the sole armed entity in the nation and push the concept that we will all be safer if the police and military are the only armed people.

We must get rid of guns because a deranged lunatic may go on a shooting spree at any time and anyone who would own a gun out of fear of such a lunatic is paranoid.

The more helpless you are the safer you are from criminals.

An intruder will be incapacitated by tear gas or oven spray, but if shot with a .357 Magnum will get angry and kill you.

A woman raped and strangled is morally superior to a woman with a smoking gun and a dead rapist at her feet.

The New England Journal of Medicine is filled with expert advice about guns; just like Guns & Ammo has some excellent treatises on heart surgery.

Ordinary people in the presence of guns turn into slaughtering butchers but revert to normal when the weapon is removed.
Guns cause violence, which is why there are so many mass killings at gun shows.

Most people can't be trusted, so we should have laws against guns, which most people will abide by because they can be trusted.

"Assault weapons" have no purpose other than to kill large numbers of people. The police need assault weapons. You do not.

Trigger locks do not interfere with the ability to use a gun for defensive purposes, which is why you see police officers with one on their duty weapon.

The whole article is here.