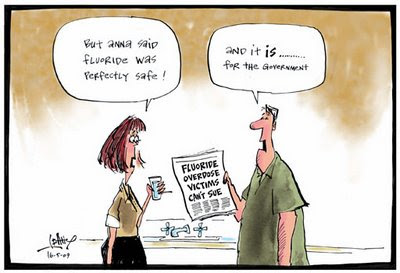 
Another move to remove fluoride from the water supply of Gympie in Queensland has been rejected by the council.  Initially it was introduced when the Bligh Labor government made the use of it compulsory in the state, but the incoming Newman government took it off the books, allowing local councils to decide the issue.
Councillors seem to believe that because various health authorities consider the use of fluoride to be beneficial, we should all be forced to adopt it, not even considering the views of the community:

… The issue has lain on the table since it was first debated by the Gympie Regional Council in December last year.  Councillor Ian Petersen wanted it taken out of the town water supply there and then, but the council voted to make no decision until it heard from the experts on both sides of the debate.

Cr Petersen had the backing of only one other councillor yesterday - Julie Walker - when he labelled the fluoridation of town water "mass medication" and said it was against the Local Government Act to continue to "mass medicate" the Gympie and Tin Can Bay residents without the "informed consent of the community."

Cr Rae Gate voted with Cr Petersen and Cr Walker when they moved the community be consulted on whether or not the Gympie and Tin Can Bay water supplies should continue to be fluoridated.

"You can sugar coat it all you want but its mass medication," Cr Petersen said.Several councillors spoke on the issue, saying they had listened to presentations and "been pressured" from both sides of the argument but had come to the final conclusion that things should be left as they are. …

While consulting the community on the issue does not address the issue of whether people should be medicated against their will, it is a considerable improvement on the local authority acting as a bunyip aristocracy that must be obeyed.
It is irrelevant whether the desirability of this treatment is recommended by state, or federal health departments, the AMA, Dental Association, the WHO, or a collection of the most popular current and past Deities, decisions on personal health belong with the individual or in the case of children, with the family.
Fluoridation of water supplies is the most inefficient method of administering this substance in any case.  The fluoride in water used to water the garden or lawn, showering, cooking, washing, etc is of no benefit to teeth; it is simply wasted.
The only reason for treating the water supply as a method of distribution is to take away any choice of those who might chose not to comply with the elite.