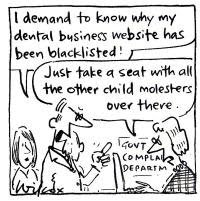 Cartoon: From SMH.com, by Cathy Wilcox.

The prude is the libertine without the courage to face his naked soul. .. A.S. Neill

Steven Conroy the Communications Minister appears to be a man whose decisions are not prejudiced in any way by having any knowledge of the subject matter relating to those areas he deals with.

Steve has long desired to control the web, well plenty of people have wanted that; entrepreneurs like Bill Gates would find it profitable, others like Steve and his government, those of China, North Korea, Saudi Arabia, Iran and so on wish it for less savoury reasons. Wowsers could use such control to shut down any publicity of such disgusting matters as people enjoying themselves other than by holding Psalm singing sessions.

The Australian government has decided that for our own good we must have censorship of the web, ostensibly to protect the little children. Commercial software programs are available for parents to use for this purpose, but hell that is not what the state wants, I mean that sort of anarchistic way of dealing with this issue, offers no chance of any sort of authoritarian central control whatsoever. Talk about spoiling the chance of a good old nanny state solution.

Steve, being both a wowser and authoritarian wants parental responsibility for supervision of children’s viewing taken out of the hands of the unprofessional mothers and fathers of this country and vested in properly trained bureaucrats. Obviously when “protecting all those little children,” it would be a hell of a waste not to inflict some social prudery, and protect all of those adults from seeing things that the government feels they do not need to see. Thus he has come up with centralized censorship.

The trouble is that Wikilinks has gone and published a list of sites to be blocked by the viewing fuehrer. From SMH:

The whistleblower site Wikileaks yesterday published the top-secret Australian Communications and Media Authority list. Websites on it will be blocked for all Australians once the Federal Government implements its mandatory internet filtering scheme, which was originally pitched as targeting only "illegal" content.

But, as experts have warned, a secret list is dangerous because those added to the list in error would have little recourse. "Any person or corporation that would be identifiable on the list would potentially be deemed by the general public … either a child molester or at least in the same category as child molesters," said a University of Sydney associate professor, Bjorn Landfeldt.

But here is where the whole thing descends into utter stupidity:

The dentist, Queenslander John Golbrani, was furious when contacted to inform him that his site appeared on the blacklist.

"A Russian company broke into our website a couple of years back and they were putting pornographic listings on there - [but] we changed across to a different web provider and we haven't had that problem since," he said.

Jocelyn Ashcroft, who runs a school canteen consultancy in Queensland, also said she had no idea why her site had made it on to the list. "The only thing I can think of is that I have emailed schools telling them about my book and CD resource How To Have A Healthy And Profitable Theme Day," she said.

Here is where it gets really interesting though; Steve maintains that the list is not the real one that his department has built up as a blacklist. So obviously it’s a stuff up, its wrong, total fabrication; right? Not so, judging by the reaction of the minister:

"ACMA is investigating this matter and is considering a range of possible actions it may take, including referral to the Australian Federal Police," Senator Conroy said.

If he is trying to get the AFP involved, some sort of crime must be assumed to have occurred, and for that to have happened, the list would have to be the genuine article. Conroy has a lot of explaining to do.

Probably one of the worst aspects of this legislation, apart from its existence is that the list is to be secret, so people like the dentist, John Golbrani whose site is to be wrongly blocked, are not allowed to know that this is the case. It would be illegal for his ISP to even let him know why the site was inaccessible. How many innocent people are to be caught up in this mess through sheer stupidity or malice, without any recourse to facts, redress, or any means to challenge decisions they are not allowed to know about?
Conroy is looking like a real would be dictator.