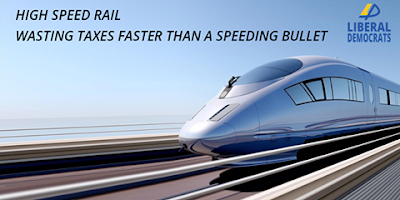 The Prime Minister Malcolm Turnbull’s announcement of the projected building of a high speed rail network up the East coast including regional centres will come as welcome relief to many traditionalists.  It is believed that it will probably replace the Eastern Suburbs Railway Line in Australian mythology.
For those not familiar with the ESRL, it was a line that was initially proposed in the late 1800s, planned in 1926, started, stopped, and promised at every election thereafter.  As such it became a part of our folklore until 1979 when it was completed by the Wran government, creating many idioms on the way.  Unemployment, for example was referred to as “working on the Eastern Suburbs line.”
Recognising the hole left in the Australian psyche by the lack of a never-never election promise, the Hawke government showed interest in the idea of high-speed rail as a politically viable though uneconomic alternative in the early 80s.  Most governments seeking re-election since then have backed the idea, which raises the possibility that in another thirty years or so, it could become an iconic promise.
At this point it will have to be either acted on or dropped, owing in this day and age to the risk of it becoming a heritage listed promise which would prevent any further action on it.
In the meantime though it will offer generous employment prospects for planners, researchers, study groups, lawyers, and think tanks, keeping them on the gravy train for the foreseeable future.
The lack of any implied commitment to HSR by the Turnbull government, raised concerns among some commentators that the government would rely on the newer, tried and tested pledge to adopt fiscal restraint, balance the budget and pay off the deficit. Economic restraint in the Liberal Party is showing signs of remaining a pipe dream for 50 – 100 years, with an accelerating rate of postponement already apparent.
You must however respect the PMs desire to stick with tradition and offer the vision of sleepers and rails heading off into the sunset.
We need to be grateful that Hawkie came up with high speed rail rather than our own death star, an idea which is just so 80s.  Death stars, while offering the sort of kudos derived from commitments to spend a billion trillion gazillion dollars, tend to be more impractical than high speed rail. Sooner or later, everyone wants one and they lose their effectiveness when other nations realise that you wouldn't be stupid enough to blow yourself up in order to get your own way.
This would probably happen sometime after the current crop of politicians leave office.
(UPDATE) The government has denied that this is how the idea got started: