Properties rendered worthless at the stroke of a pen 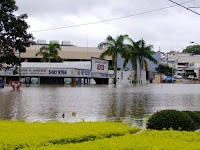 Image: Flooding in the lower portion of Gympie. (These properties regularly go under even in moderate to minor floods)
A number of Queensland property owners have discovered to their shock that their properties have been rendered virtually worthless owing to new flood mapping ordered by the state government.
Worse still, many are finding out about this only when sales of their homes fall through when the conveyancing is carried out.  The authorities who ordered the change, and those who carried it out didn’t think it was worth their time and trouble letting the owners know:

Mr Butterfield said the sale of his Van Doren Rd property didn't proceed after a title search by a prospective buyer showed his home flooded, even though water has never entered the house.

Mr Butterfield bought the five-acre property on the Southside, six years ago.  At the time he did the necessary checks and searches.  They cleared the house of any potential flood problems.

Now Mr Butterfield says four houses on his road all go under water according to the new mapping.

The council, under instruction from the State Government, adopted a new one-in-100-year flood line after an in-depth study by engineering firm GHD in early 2012.

A council spokesperson said the new mapping had been based on more up-to-date contouring and flooding information.  Some areas that hadn't previously had flood lines have been included in the study.

This highlights the problems associated with local government, which serves the local communities being made an instrument of higher government policy and is an example of why the local government referendum should be rejected.  Passing it will add another level of intervention in the affairs of councils.
Local governments have experience in their areas and should be left to make their own decisions on such matters if, and should this become necessary.