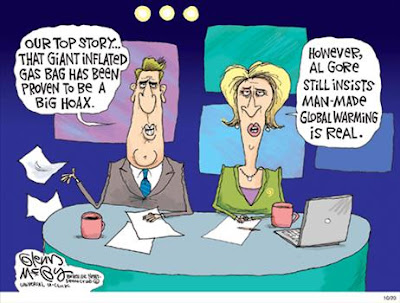 
I am doing a lot of GW posts of late with good reason. In a matter of weeks, unless we stop them, western governments along with the green movement, and the powers that be in every corrupt totalitarian shit-hole on earth are set to meet in Copenhagen to establish another tier of governance over us. This time there will be no accountability, no elections, no redress, and no chance of ever getting rid of them.

The three layers of government we have already are excessive in cost, compliance, and their deleterious effect on our liberties, we don’t need a fourth, especially one consisting entirely of an unelected bureaucracy.

Viv Forbes is as usual spot on:

Every day we hear some pious politician bleating about the end of the world unless we reduce our usage of carbon fuels like coal, oil and gas.

But every day we see them using taxpayers’ money to promote motor rallies, international sports functions, games, expos, carnivals, tourism and their own frequent jaunts to yet another conference in yet another posh foreign location. Every one of these activities requires the burning of tankers of carbon fuel for its success.

Are they fools, do they think we are fools, are they hypocrites, or are they just whipping up climate hysteria to disguise their greedy grab for more taxes on everything we use and more control of everything we do?

The Australian is no longer taken in:

On Monday The Guardian in Britain quoted a top European official who described the idea of negotiating on targets as naive and said the best that could be expected was that countries would put up what they wanted to commit to.

Just as well, really, if we consider figures published in an article in The Washington Post, also on Monday, by Danish statistician and environmentalist Bjorn Lomborg.

His Copenhagen Consensus Centre commissioned well-known climate economist Richard Tol, a contributor to the UN's Intergovernmental Panel on Climate Change, to estimate the cost of emissions targets needed to keep the rise in global temperature to under the 2C limit suggested by the IPCC's work. Tol's answer is a global price tag of $US40 trillion in 2100, to avoid expected climate damage costing $US1.1 trillion. These figures are based on mainstream economic models and subject to the usual limitations of modeling over long periods. …

Kevin Rudd has been using various arguments to push his case for urgent, substantial action on climate change and one he used in the US last week is the threat of a European carbon tax on exports from countries "not doing their bit on climate change".

Rudd only mentioned remarks by French President Nicolas Sarkozy, but it is actually a joint initiative by France and Germany's newly re-elected Chancellor Angela Merkel. Instead of, at least implicitly, accepting this as a legitimate tactic by the Europeans, Rudd should be denouncing it at every opportunity.

The last thing Australia and the world need is a global trade war sparked by European attempts to bully the world into adopting its climate change policies, which are under attack in the EU itself, to shelter its industries from the economic damage its climate policies will impose.

Some more figures from Lomborg. Economic estimates suggest freer trade would deliver global benefits of the order of $US50trillion. Why put these gains at risk to avoid global warming damage estimated at $US1.1 trillion? Fortunately there has already been a reaction in Europe and in other countries against the Franco-German threat.

Rudd will use any strategy to march in lockstep with anyone who will give him any excuse to introduce further micromanagement on Australians, especially if it gives him the chance to tax and spend at a higher rate.

The whole thing is an exercise in futility as China and India are staying out:

On October 22, an accord was signed by Xie Zhenhua, China's vice minister at the National Development and Reform Commission, and Jairam Ramesh, India's environment minister, in New Delhi. The memorandum provides an alternative framework to counter pressure from America and Europe to adopt mandatory limits on greenhouse gas emissions in a new UN treaty. …

China and India, along with Brazil, Mexico and South Africa, have been adamant about staying out of any global requirement. By forming regional alignments that keep policy in the hands of national governments, the developing countries expect to be able to resist Western and UN pressure.

It is easier to stay independent of the climate paranoia if one does not believe the planet is in peril. Xiao Ziniu, director general of the Beijing Climate Centre, told the British Guardian newspaper recently that, "There is no agreed conclusion about how much change is dangerous.... Whether the climate turns warmer or cooler, there are both positive and negative effects....In Chinese history, there have been many periods warmer than today." He disputed the disaster warnings of the UNIPCC, saying, "The accuracy of the prediction is very low because the climate is affected by many mechanisms we do not fully understand."

I recommend this full article as the Chinese present a good case. This will not end this matter as Global warming has long ago moved from science into the political arena from the time that Al Gore marched on to the scene and realized the profits that could be garnered from frightening people with science fiction. It is no longer about the environment, its all about power and profit.