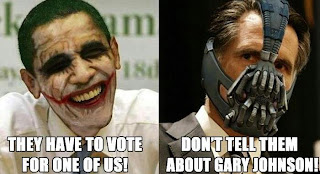 Images: No to Barack Obama and Mitt Romney

When you think about it, there are a hell of a lot of parallels between the US and Australia, although, while they have Obama, Johnny Cash and Bob Hope, we have Julia Gillard, no cash and no bloody hope (old one, sorry).

Other than that it sometimes appears that both leaders plagiarize each other in their statements. Obama has “tried real hard, Gillard has “done the best she

can,” Obama has done so much he has not spent enough time trying to get the message across to the unwashed masses, Gillard, ditto.

But, wait, there’s more. Obama is up for election against an opponent who is the closest thing to the character of Arthur Daley in ‘Minder’ that most of us have encountered, Gillard is opposed by Tony Abbott, who poses as Gillard lite; both only being acceptable because the current leader is worse.

The author, Douglas Adams, was probably the most capable social commentator of his time and wrote the following passage in, “So Long and Thanks for all the Fish:”

"Odd," said Arthur, "I thought you said it was a democracy."

"So," said Arthur, hoping he wasn't sounding ridiculously obtuse, "why don't the people get rid of the lizards?"

"You mean they actually vote for the lizards?"

"Because if they didn't vote for a lizard," said Ford, "the wrong lizard might get in. …

"Some people say that the lizards are the best thing that ever happened to them," he said. "They're completely wrong of course, completely and utterly wrong, but someone's got to say it."

This kind of rings a bell; doesn’t it?