"It depends on what the meaning of the words 'is' is." –Bill Clinton (master of semantics) 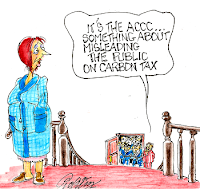 Paul Syvret seems to be echoing Bill in his argument that Julia Gillard did not lie when she said, “There will be no carbon tax under a government I lead.” His argument seems to be based around changed circumstances necessitating a breach of a promise to the electorate:


Ultimately the price of winning government with the support of the Greens and Independents was a price on carbon. Gillard, ever the pragmatist, changed her mind and broke a promise. The circumstances had changed, or as Tony Abbott himself has been heard to note, "s--- happens".

There is a gulf of difference between a broken promise in the context of altered circumstance, and a deliberate decision to mislead. As such, to accuse Gillard of lying, to argue that the carbon pricing scheme is based on a deliberate, pre-meditated lie, in itself displays some towering mendacity.

That it has persisted for so long and spawned the meme "Ju-liar" (a term used only by the ignorant, boorish and spiteful) says more about Abbott's guile and ability to manipulate the facts for his own destructive ends than it does our Prime Minister's trustworthiness.

You've heard all the lines, ad nauseam no doubt - "this toxic tax based on a lie" - all of it in itself is a falsehood, made even more brazen, given Abbott's self-declared "weather-vane" stance on the issue.

Regardless of the semantics involved in her ‘refusal to rule out’ an Emissions Trading Scheme, the sound bite used to front the 2010 election was, “There will be no carbon tax under a government I lead.” It was pitched to an electorate already growing nervous of the impact of a big new tax on Australian industry in a time of economic uncertainty.

The fact was that a promise had been made to the Australian people and regardless of the need for the support of the Greens, which was a solid undertaking and should have been carried out. After promising no carbon tax, negotiating on creating was not an option. To immediately turn around and enact one is in fact blatant dishonesty; it should have been off limits.

The idea that it had to be done to secure Green support is clearly a lie. The idea that the Greens would support anyone other than Labor is ridiculous.

Arguments that Tony Abbott has been less than straightforward with the electorate excuses Gillard are a contrivance. The fact that one side is dishonest does not excuse the other side’s culpability for similar behavior.