Batman, a fascist one percenter with libertarian roots? 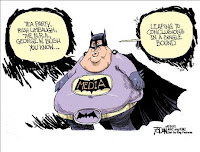 Where would we be without a little ideology with our breakfast, lunch, dinner, and the entertainment afterwards? Without the guidance of the liberal elite you may well finding yourself eating Chick-fil-A without realizing just how politically incorrect this is.

Now, film critics are warning us that excessive exposure to Batman will cause your children to put on brown shirts and wreak havoc on the lovely ‘Occupy’ people on behalf of the one percent, or something like that:

… Andrew O'Heir, in his review for Salon.com, hyperbolically warned that the Batman franchise ended with "a gloomy, magnificent (and fascistic) spectacle." The article's headline described it as director "Christopher Nolan's evil masterpiece.”

The Washington Post's Ann Hornaday extolled the film as a near classic, but lectured, "'The Dark Knight Rises' becomes an almost spiritual parable of anti-populism and unshakable faith in law, order and the morally superior wisdom of the One Percent." She also pointed out that the film hews "faithfully to Batman’s libertarian leanings.”

Contradictions abound in "The Dark Knight Rises." There is a man (Thomas Hardy’s Bane) who urges populist unrest against a monied elite and a woman (Anne Hathaway's Selina Kyle) who speaks the language of social justice, stirringly asking a member of the 1% "how you ever thought you could live so large and leave so little for the rest of us.” Yet both are, for at least chunks of the movie, villains — in Bane's case, murderously and maliciously so. …

... In the film's most blatantly political scene, Bane whips supporters into a populist frenzy as they literally rip wealthy people out of their penthouses to beat and rob them. It’s a jarring viewing experience. The language of revolt and justice would seem to call for sympathy with the rebels. But the violence of their attacks makes you side, discomfittingly and reflexively, with the pampered rich. …

Batman’s political status has been an open secret in libertarian circles for years; it’s been part of our conspiracy for worldwide domination, taking over all government powers and making people do whatever they like. Unfortunately, of late he has been a little careless in concealing his true agenda.

The LIVE FREE sticker on the batmobile could be easily overlooked, and few people recognized him when he appeared as a delegate at the Libertarian Party Convention. But when Rahm Emanuel lit up the distress beacon over Chicago and found the bat image had been replaced by a coiled serpent with the words “Don’t tread” beneath it, our days of secrecy were numbered.