Hit Jobs, but isn't Obama above all that. 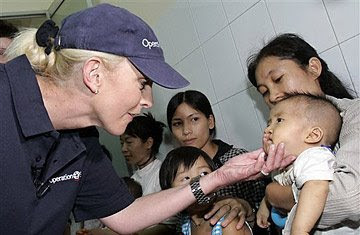 SJ Reidhead is a significant source of the information in this post.

There will always be some of the more extreme elements, some to the point of being human filth around election campaigns. Most candidates tend to discourage this sort of thing as they not only invite retaliation, but also tend to be an embarrassment to anyone with a sense of honour. John McCain seems to have little time for them, and has disassociated himself from them.

They seem to be out in force at present however on the left hand side of the online world, and there they are not rejected.

Right Pundits has exposed an organised smear campaign aimed at Cindy McCain in order to discredit her or even to destroy the McCain marriage.

“The tale of a Cindy McCain affair has an even more suspicious beginning. The rumor did not start from a blog or any news source at all. Instead, is started from Internet searches themselves! About 9pm EST on June 18th 2008 a giant rush of internet searches for “Cindy McCain affair” were made in the Google search engine.
Google keeps a list of hot searches that it makes available to bloggers as a service to the blogging community. The service tracks what people are looking for on the internet at any given hour. Many bloggers keep abreast of those search trends for stories that they might have missed. Many stories will appear on the internet as a result of monitoring those hot searches, something I like to call “me too” stories.
That is what happened with the Cindy McCain affair rumor. It was manufactured out of thin air as a result of a giant rush of sudden, inexplicable internet searches for the topic. Whether the search engines were deliberately manipulated to produce a buzz is anyone’s guess. My guess is the campaigns are sophisticated enough about the internet to know that computerized searches can be rigged to simulate a million searches in an hour to produce a Machiavellian effect. Create enough searches for a story and you create the story.
Predictably, a thin blog post then appeared as a response to the searches themselves. Credit this time goes to an unknown blog called “Corey’s Hijinks” which first published an article about the rumored Cindy McCain affair about 60 minutes after the searches first stormed the internet. Corey’s Hijinks has been in existence for 60 days and claims “Word, thoughts, and other junk” as a slogan. It posts stories exclusively based on hot searches, manufacturing a supply for a perceived search demand.”

This was obviously a deliberate calculated effort to manipulate a story where none existed, for the political ends of another candidate, and there is only one who would benefit by this. Well he has been promising a new way.

Another interesting smear the Obama campaign is raising for another attempt to give it some legs is the old disproven one that McCain abused his wife with disgusting language in public which was put up by a left wing hack writer who has never been able to come up with a source.

This has now been featured on Youtube by a group calling itself ‘The Public Service Administration’ that alleges to be a comedy group. The problem is they only make fun of people who are running against Barack Obama. This is obviously a supporting element to the Democrat campaign, right. Well no they also attacked Hillary Clinton.

MSNBC meanwhile is doing its usual thing, hit jobs on McCain, with the latest being some leftist dweeb named Dan Abrams, playing an excerpt from an interview with John McCain on Fox where he says, “It wasn’t until I was deprived of her company that I fell in love with America,” which he then proceeds to repeat over and over playing every clip he could find of it and laboring the subject.

Dan is apparently trying to present himself as some sort of new Keith Oberman, without much success. (Dan the real Keith would be just as obviously a mouthpiece, but would find a few more words to express it, repetition just gets so boring.)

McCain was obviously very fond of his country, otherwise he would not have placed himself in the position he did. He had the chance to leave the theatre shortly before being shot down when his ship returned for repairs, but volunteered to stay on with another ship that needed more pilots.

He is indicating in this probably that he may have taken it a bit for granted until that, or some similar idea. To suggest that he was somehow ‘unpatriotic’ over this statement is really laboring the Democrat cause a bit.

Labels: Politics, The left, The Press