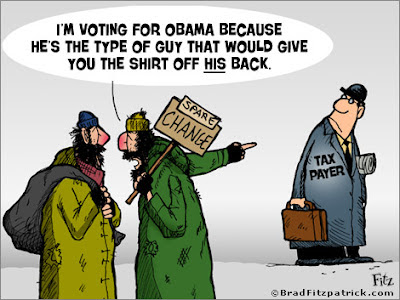 The Obama attacked John McCain after he told FOX that Barack Obama has shown a “contradiction” by talking tough and not following through by naming Jim Johnson as the head of his VP search team. It was reported in the Wall Street Journal that Johnson may have received preferential loan treatment from Countrywide, a mortgage company Obama has railed against on the stump.

They claimed that the McCain campaign was hypocritical to make this an issue when John Green, one of John McCain’s top advisors, lobbied for Ameriquest, which was one of the nation’s largest subprime lenders and a key player in the mortgage crisis. Obama claims that if he is President, he will crack down on fraudulent lenders and bring real relief to Americans struggling in the grip of the housing crisis.

As usual the Obama campaign in response to the Jim Johnson controversy include a lot of "hey, look at that McCain adviser!" and nothing on how Johnson made 21 million in a single year from Fannie-Mae, a quasi-private corporation that enjoys a massive subsidy of taxpayers' money.

Then we find Penny Pritzker at the center of Barack Obama's hypocrisy over his relationship to subprime lenders. The Pritzkers are one of the leading business families of Chicago. They run Hyatt and have a reputation for particularly cut-throat business practices.

"After federal regulators closed the $2.3 billion Superior Bank in July 2001, investigations revealed that the suburban Chicago thrift was tainted with the hallmarks of a mini-Enron scandal. New legal developments are adding additional twists, including racketeering charges."
"And yet the bank’s owners, members if one of America’s wealthiest families, ultimately could end up profiting from the bank’s collapse, while many of Superior’s borrowers and depositors suffer financial losses."

Penny Pritzker is Obama's Finance Chair. She was the former Chairwoman of the failed Superior Bank FSB, a Chicago-area thrift which according to regulators via a 2001 Chicago Tribune article, was due to "poor oversight by its board." The depositors felt so screwed, that they filed a RICO suit against Penny and other directors.

The Pritzker family held a 50% stake, and Ms. Pritzker had been on the board of the bank's holding company. Anxious to avoid further embarrassment and liability, the Pritzkers and their co-owner settled with federal officials by agreeing to pay $460 million over 15 years.

And then the Obama campaign shopped a story about UBS, and didn't point out that the CEO of UBS has raised a quarter million for Obama.

So Obama is attacking CEOs of subprime lenders. And his Finance Chairman was the Chairman of a subprime lender that went under because of poor oversight. One of his major donors is the CEO of another one. And the person making his VP recommendation got a sweetheart deal from another.

If Obama keeps using the darn-those-greedy-CEOs lines in his speeches, could he at least insert the disclaimer, "except for CEOs who work on my veep selection committee"?

“It takes a lot of nerve for Barack Obama to stand before voters, speak to the rising costs hurting families, attack his opponent on the housing crisis, and completely ignore the fact that both he and his campaign leadership have enjoyed housing deals that no average North Carolinian would be able to access. Obama’s failure to address the scandals within his own campaign and instead spend his time attacking others is the sort of old politics that will be rejected by the American people. Voters deserve straight talk from their leaders – not recycled rhetoric that ducks serious questions.”

Jim Johnson, A Former CEO Of Fannie Mae Chosen To Lead Obama’s Vice Presidential Search Committee, Received Special Loans From Countrywide Financial CEO Angelo Mozilo. “Countrywide Financial Corp. makes mortgage loans through a vast network of offices, brokers and call centers. But a few customers have gotten their loans a special way: through Countrywide Chief Executive Angelo Mozilo. These borrowers, known internally as ‘friends of Angelo’ or FoA, include two former CEOs of Fannie Mae, the biggest buyer of Countrywide’s mortgages, say people familiar with the matter. One was James Johnson, a longtime Democratic Party power and an adviser to Sen. Barack Obama’s campaign, who this past week was named to a panel that is vetting running-mate possibilities for the presumed nominee.” (Glenn R. Simpson and James R. Hagerty, “Countrywide Friends Got Good Loans,” The Wall Street Journal, 6/7/08)

-1. While CEO Of Fannie Mae, Johnson And Mozilo Worked Closely And Maintained A “Close Friendship.” “From 1991 to 1998, Mr. Johnson served as CEO of the Federal National Mortgage Association, also known as Fannie Mae, which worked closely with Countrywide, one of the nation’s leading lenders and loan servicing companies. In 1996, Mr. Johnson named Mr. Mozilo as chairman of Fannie Mae’s national advisory council. A 1999 article in the American Banker said the two men had a ‘close friendship.’” (Josh Gerstein, “Top Talent Scout For Obama Tied To Subprime Lender,” The New York Sun, 6/9/08)

“Property Records Show Mr. Johnson Has Received More Than $7 Million In Loans From Countrywide Since 1998, The First Coming In The Waning Days Of His Fannie Mae Tenure.” (Glenn R. Simpson and James R. Hagerty, “Countrywide Friends Got Good Loans,” The Wall Street Journal, 6/7/08)

-1. At Least Two Of The Mortgages Were At Rates “Below Market Averages.” “The Journal said at least two of the mortgages, among a series of loans made available to people Countrywide officials called ‘friends of Angelo,’ were at rates below market averages, though it is difficult to predict a market rate without access to nonpublic information about a borrower’s credit history and other factors that can reduce interest charges on a loan.” (Josh Gerstein, “Top Talent Scout For Obama Tied To Subprime Lender,” The New York Sun, 6/9/08)

As Recently As 2003, Johnson Has Praised Mozilo’s Leadership Of Fannie Mae, Calling It “Remarkably Impressive.” “Since leaving Fannie Mae, Mr. Johnson has lavished praise on Mr. Mozilo’s performance, calling it ‘remarkably impressive ‘ in a 2003 interview with BusinessWeek. ‘By strengthening servicing in good times, Countrywide has done a brilliant job of insulating itself for the down cycle,’ Mr. Johnson told Fortune in 2003.” (Josh Gerstein, “Top Talent Scout For Obama Tied To Subprime Lender,” The New York Sun, 6/9/08)

-1. NOTE: “In Recent Months, The Job Has Been Looking Less Than Brilliant, As Countrywide Reported Billions In Losses, Much Of It From So-Called Subprime Loans Made To Borrowers Unqualified For Typical Loans.” (Josh Gerstein, “Top Talent Scout For Obama Tied To Subprime Lender,” The New York Sun, 6/9/08)