Obama, exposing those 'lies' other than from his own campaign. 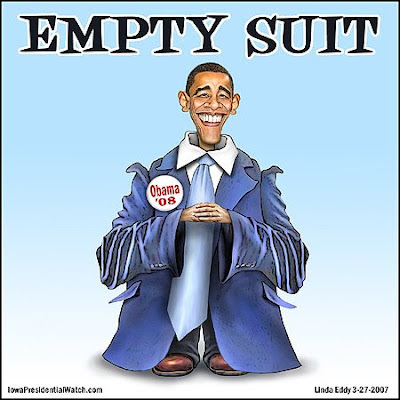 Barack Obama is trying out the the Internet and enthusiasm of his supporters to fight what he claims is a smear campaign stalking his campaign for the Presidency.

He has unveiled a new website at www.fightthesmears.com to debunk false rumors peddled by email and right-wing media outlets.

The site was created after one recent, and thus-far unfounded, assertion that Obama's wife Michelle had been caught on tape slurring white people.

"People can upload their address books and easily send fact-based emails to their friends and family.

"You have to proactively tell people the truth for us to fight back."

This has the sound of the activity of the Paulbots from a while ago, who would attack in droves at the slightest hint of any criticism of their candidate. I would like to think that the intentions of the candidate would match his rhetoric but on past record I don’t hold out much hope of this.

I have seen accusations against candidates, which I frankly feel are untrue, unethical, and unprincipled on the net, and avoid pushing these. The fact is though, that most of these are coming from the Obama campaign supporters. Whether these grubs are officially linked to his campaign is a matter of conjecture.

Of more concern to me are the smear tactics from Obama himself and people who are close to him.

Obama has consistently claimed that ‘McCain wants a 100 year war in Iraq despite knowing that it is untrue. Howard Dean is one of his backups on that, even claiming that when McCain quotes the text of what he originally said, ‘that it is a distortion’.


Brownstein is absolutely right. McCain has fought back against the use of his “100 Years” statement stating it was in the context of a US presence similar to Korea. That is fine; personally, I haven’t any problem with that interpretation. —Yet McCain has also strongly warned of the dire consequences should US troops redeploy. That’s where the problem comes in.

McCain’s defense has always been to show the clip or to repeat what he actually said, and Fox played that clip. Dean’s response was to claim, “Our problem is that McCain is distorting what he [McCain] said.” The Dems feel that if their edited out sections of what he said are left in it is a distortion. Shout the lie again, fellas someone might believe it this time.

Note that FactCheck. Org has said that “What the DNC conveys is the opposite of what McCain said.

Obama then compounded his falsehood by claiming; John McCain got upset today apparently because I had repeated exactly what he said, which is that we might be there [Iraq] for 100 years if he had his way. This is not what he said, and could only be considered a deliberate distortion of the situation.

John McCain released a positive ad highlighting his lifetime of service to the American people, which nobody would deny. The reaction from Howard Dean was to accuse him of being an opportunist. Obama tries to claim some sort of military kudos by making false claims about uncles and so on.

Democratic Sen. Jay Rockefeller, an Obama acolite claimed, McCain dropped laser-guided missiles from 35,000 feet. He was long gone when they hit.” “What happened when they get to the ground? He doesn’t know. You have to care about the lives of people.

John McCain was engaged in low-level attack on a heavily defended power plant in Hanoi when he was shot down. McCain and his comrades were willing to put their lives at great risk in order to hit specific, high-value targets without the assistance of guided munitions. The laser guidance system was not use until the next year.

It would be utterly inconceivable that Rockefeller was not aware of the facts when making this claim.

Before Obama makes any more claims to the moral high ground he should actually try to find some to stand on.