Zimbabwe, We need the League of Democracies NOW. 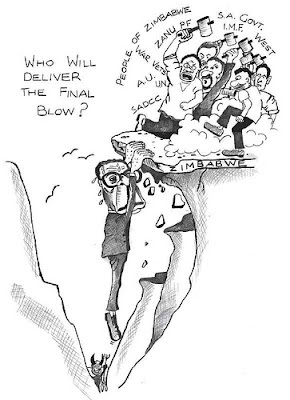 THE United States has called for urgent Security Council action on the Zimbabwe crisis after President Mugabe's regime struck at his rivals only two weeks before Zimbabwe's presidential run-off.

The US ambassador also said 20 tones of American food aid for impoverished Zimbabwean children had been seized by authorities last week and given to Mugabe supporters at a rally.
The repeated detentions, coupled with Western accusations the Zimbabwe regime is using food as a weapon, demonstrate the obstacles to the Opposition's campaign thrown up by the longtime leader.
Mugabe has raised the spectre of war by warning that his staunchest supporters are ready to take up arms rather than let the Opposition triumph in a June 27 election.

All pretence that this regime is in some way democratic should be binned where they have belonged for years.

No international recognition or protection should be afforded to governments which rule by terrorizing their own people no matter how they came to power in the first place, and no manner of throwing them out should be illegal, as long as the rights of the population of those countries are respected afterwards.

One of John McCain’s better ideas has been the establishment of a “League of Democracies”. It sounds very much like a solution some of us came up with in a discussion on the thoughts on Freedom site some time ago, and which I have already posted on as the ‘Allied Democracies Group.’

I think it would be most unwise to hold our breaths waiting for the UN to do something, I would like to be wrong on this, but I doubt it.

I believe a League of Democracies or an Allied Democracies Group could be a viable proposition along the following lines: -

(1) That the above organization be made up of nations with a high standard of liberty and human rights.

(2) An agreed format for the requirement for intervention to be declared.

(3) A mutual defense pact, be formed among those countries.

(4) The nations within the organization strip tyrant nations of their recognition.

(5) Sanctions by the member nations in combination with (4) above to be used in preference to military intervention.

(7) The UN would be supported only when they are acting in a proper manner.

This pretty much concludes the points, at least those I can think of at the moment, but I feel there will be others.

There are at present several European armies not being constructively used, there is really no good reason to allow this barbarity to go on.