Obama and stupid reasons to vote for him. 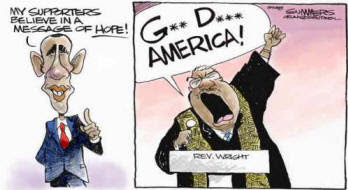 This is a comment left on one of the sites I visit frequently: -

“Actually, I kind of want Obama to win just to shut up the morally high and mighty lefties that refuse to believe racist Americans would ever elect a black man.”

I think given the context that this remark was made ‘tongue in cheek’ however I am inclined to think that this thinking is out there being taken seriously. One party or another was always going to put up an African American sooner or later, and race would in fact be a background issue.

Our side has put up the name of Colin Powel, at times and Condoleezza Rice is still considered a viable VP by some even now. Both would be excellent, although I worry that Powel may be a little suspect on gun rights.

I think most of my readers know by now of my preference for Sarah Palin for VP however if she were to be unavailable, I consider the sheer ability of Condi to make it worth taking the risk of putting up a prominent figure from the current administration. She has performed with distinction in a very difficult time.

Both of them are credible people, and would both be very deserving of America’s votes. There would be no point in putting up a totally unsuitable candidate with no qualifications or experience. In the unlikely event of such a candidate getting elected, the results of the administration would set back the cause of black American politics for years to come.

A black president will be a great thing when it happens, as long as it happens for the right reasons, that is that the person who makes it is the best of the candidates available in a good field. This is not the case in this election.

With the active collaboration of the liberal press they decided to throw Hillary under the bus and present us with a candidate who is surrounded with religious whackos, political left wing extremists, and corrupt sleezebags. Add to this his propensity for ‘misspeaks’ like his relatives liberation of death camps that the Red Army carried out, and how many states was that again?

Of course you have to expect a certain amount of confusion from a guy whose parents met and conceived him at an event that occurred several years after he was born.

It will be great when America votes in someone who will “shut up the morally high and mighty lefties that refuse to believe racist Americans would ever elect a black man,” or alternatively a woman of any race, but lets get it right first.