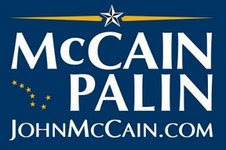 I just received an interesting series of Emails from three of my contacts in the US and have decided to share some of their views, as well as some of mine as follows.

There is a hard push for Romney by the talk show mafia for VP. On Palin..."Puh-lez" said Hewitt, "We already have Alaska and she's a nobody with zero experience."

This is idiot talk, while there may be a tactic of selecting a VP who will bring home another state that the Presidential candidate can’t get on his own it is ridiculous to say that a viable candidate from a state which may be in the bag, (if it is) should be automatically excluded. Few would agree that she is a nobody, and as a governor she has vastly more executive experience than Obama.

Medved had a woman on his show, a main stream Conservative from the Heritage Foundation who came right out and said she wanted to limit Hispanic and Latino immigrants, including those 2nd and 3rd generation.

That was Heather MacDonald. She's basically an anti-Hispanic racist, her work completely discredited by reliable sources. She writes for all the usual anti-immigration sources, is their little darling. Her statistics have been debunked time and time again, but it doesn't matter.

Michael pointed out that those "2nd and 3rd generation" were American citizens and she said that is why we have to close our southern borders and give Asian and Canadian immigrants preference for citizenship so we'd have the right 2nd and 3rd generation citizens that will add to our nation not take away jobs and social services.

“The right 2nd and 3rd generation citizens,” really says what she is on about. She feels that Hispanics are an inferior ‘breed’ to Asians and Canadians.

Medved had a counter point guest who quoted study after study showing that Hispanics are under represented in jails and other unsavory numbers. He also said that Hispanics were less likely to use the social services and could not be compared to Blacks who have been in the system for generations.

She didn't want to hear it. She got angry at the "race card" being pulled but it was obvious that the focus of all this immigration anger wasn't legal or illegal; just toward Hispanics and their legal offspring.

These elite, ivy league, so called conservatives are going to put the most scary liberal in the WH. And that illegal (aka Hispanic) immigration vitriolic talk has got to go where Tancredo and Hunter and Santorium (and ultimately Romney once he got on that wagon) went.

There are aspects of American politics that I simply don’t understand. The thing I love about America is that in many ways it is not only a geographical entity but a state of mind, a philosophy in its own right. The concept of liberty it is founded on and which the left despises is something to aspire to. The basic concept of ‘consensual’ government, that is government by the consent of the governed is a wonderful innovation.

I am seeing more and more writings indicating that Hispanics are not that fond of Obama, and dislike the Democrats, who tend to use the threat of deportation in elections to blackmail them into voting for the left. Eric Dondero over at Libertarian Republican has made numerous posts urging the GOP to try harder in Hispanic areas as they are available to us.

Are the extreme conservatives the descendents of the old Southern Democrats?

My only regret about Sarah Palin is that she didn’t start a bit sooner in politics and is not at the moment a credible candidate for the Presidency at the moment.

My thanks to Malia Nash, SJ Reidhead, and Steve Maloney.