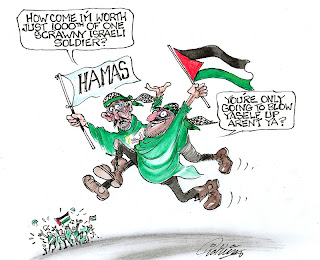 Ibrahim Siddiq-Conlon is up to his old stunts again, this time starting a Face book page, “The Australian Defence Force: The Real Terrorists” in which he listed every Australian killed in the Afghanistan campaign and accused them of being terrorists because of their military service.

We have mentioned Siddiq-Conlon in these pages before owing to his establishment of the Sharia4Australia movement. Conlon who sees democracy as a ‘challenge to Gods law’ wants to live under Sharia, and wants it imposed on all of us to stop us drinking beer, eating pork, and all the rest of those things his cult is intolerant towards.

His hate site has been taken down after the ADF received complaints and notified the Australian Federal Police and Facebook. If it were not the hurt it has caused the families of soldiers who have lost their lives there, it may have been for the best to leave it up. There is something positive in allowing the public to see it and assess for themselves just what a piece of shit he really is:

The unapologetic Muslim convert, who received death threats soon after creating the site, has continued to trash dead Diggers by posting hate-fuelled messages on other Facebook pages.

"May they rot in hell," he wrote in one message. In another posting he wrote: "I hope I got your blood boiling. That's what I like. It's my hobby. My fun. My pleasure.”

Australian-born Mr Siddiq-Conlon, formerly known as Shannon James Conlon, also labelled his grandfathers terrorists because of their service for the Australian Army in Kokoda and the Middle East. He has said he was proud of being referred to as an "extremist" and "terrorist supporter." 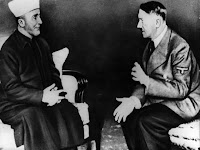 There is nothing new in Muslim antipathy towards those who fought against the Axis powers. There has been a long standing friendship between Muslims and fascists as depicted in this image of Hitler with the Grand Mufti of Jerusalem, Mufti Haj al-Amin al-Husseini. Husseini spent most of WW2 in Italy and Germany and actively helped recruit Muslims into the Waffen SS.

Even our old mate Sydney cleric Sheikh Taj Din al-Hilali, (the thick Sheik) who created controversy when he referred to ‘immodestly’ clad women as ‘meat’ and inviting rape is concerned about extremists like Conlon:

Hilali told The Australian: "I am worried for our community and our society. I am worried for that because this will encourage the youth to act against elections and act against dealing with others, which is dangerous." He warned of Rambo-style preachers whose aggressive sermons appealed to "the way of youth."

"The louder they speak, the more youth they gather around them," he said.