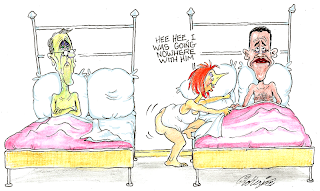 
There is not much in the news today other than the Obama visit. TV news is even worse, with endless shots of Gillard gazing soulfully at the President as if smitten.

The Media Inquiry offers some respite, with the Fairfax boss, Greg Hywood wondering what its all about. Greg is probably wondering how come he is in the position of having four of his staff, editor-in-chief, Paul Ramadge, senior editor Mark Baker and reporters Royce Millar and Nick McKenzie being investigated for hacking into the ALP electoral database, after pointing the finger at News Corp over the News of the World scandal:

''What problem are we solving here?'' he asked. ''What's the issue current in the media, in the way that we're operating, that needs a solution? What we have not got are examples of serious atrocities of the like that occurred in the UK that must be fixed. There's nothing systemic here that needs fundamental institutional change.”

News chairman John Hartigan generated much more interest. Alluding to the origin of the inquiry which was an effort to intimidate News Ltd and placate the Greens, who resent being placed under scrutiny by News, he let fly:

THE Gillard government had called the print media inquiry because it was "on the nose with the public and looking for someone to blame", News Limited chairman and chief executive John Hartigan has told the inquiry.

The inquiry's existence rested on three presumptions, he said: That journalists in Australia had been guilty of the same sort of behaviour exposed in Britain by the phone-hacking scandal, that News papers were "waging a campaign of bias" against the government, and that print media watchdog the Australian Press Council was a toothless tiger.

"Each presumption is demonstrably false," Mr Hartigan said. "And yet here we are.” “The Gillard government had sullied the reputation of News journalists by linking them with the phone-hacking scandal with out putting up any evidence to support that, he said.”

"Critics are now deafening in their silence," he said. "They didn't put up and now they have shut up.”

The Gillard government announced the print media inquiry in September, backed by the Greens, after criticising the political coverage of some News mastheads, including The Australian.

"I accept when you're reaching that proportion of the Australian population huge responsibility goes with that," Mr Hartigan answered. "In some instances ... we bring pressure to bear on behalf of our readership to make changes.” If News wielded as much power as some people claimed Australia would be a republic "as we campaigned long and hard for that", he said.

Its not quite up to the way Kerry Packer stood up to parliament, but its nice to see a CEO with guts and a willingness to call bullshit when he saw it.