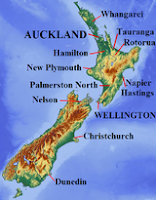 The New Zealand National Party have dad a massive win in the latest national election there winning nearly half the vote (48%) and one short of a majority in its own right of members in the national parliament. With the almost guaranteed support of ACT Party, and one other and the possible support of the Maori Party they are set to govern in coalition.

It is unlikely that they will degenerate into the circus act of our governing Labor Party as the coalition parties are rock solid, rather than the quirky, eccentric, and downright insane independents and Greens that Gillard has tied her hands to.

The bad news for libertarians is that the ACT Party failed to get enough votes to gain list seats, only managing to hold Epsom, the former seat of Rodney Hyde who declined to stand after losing the party leadership. One bright spot in all of this though is that one of the reasons for the strength of the Nationals win is that evidence suggests that they have embraced some ACT policies, thus contributing to the loss of ACT support.

It is to be hoped that with the somewhat divisive and over the top leadership of Hyde, the more sensible elements of the party such as Sir Roger Douglas will be able to rebuild the party as a separate and influential entity.

Among the other news, the more ‘pure’ libertarian, Libertarianz Party only received 0.07%, less than the Aotearoa Legalise Cannabis Party on 0.47%. Libertarianz are relatively new to the scene and there is little news of their campaign style, but given the support for Cannabis reform they really should have done better. It is doubtful that ‘pure’ libertarian parties will achieve a great deal of traction until the more practical libertarians in the form of Classic Liberals pave the way.

The bad news is that the Greens increased their vote and appear likely to hold 13 seats, all of them ‘list’ in the new parliament. They though won no seats outright. It is to be hoped that NZ Labour are sane enough to avoid doing any deals with them in the hope of enhancing their electoral hopes, something that would guarantee that they would remain at less than 30% of the vote and needing to rely on the most aggressive competitor for the left wing loony vote for their political survival.

Their primary vote is about the same as that of Labor here and a deal with the Greens will only see that situation get worse.