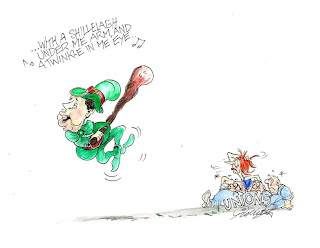 Cartoon: by Pickering,(for overseas readers; Allan Joyce is an Irishman.)

Over the last weeks and months viewers became accustomed to the sight of chaos at airports caused by a series of rolling stoppages by unionists employed by Qantas in support of wage demands. Numerous images appeared of disgruntled travelers, inconvenienced by delays and cancelled flights stating that they would never use the airline again. The unions were talking of a slow bake of Qantas for as long as it took.

Last Saturday Qantas CEO, Allan Joyce bit the bullet, grounded the airline worldwide, and locked out the employees. Rather than allow the company to suffer a suffer a death by a thousand cuts, losing $15 million per week, and its reputation for reliability being trashed by its staff, he had to bring the matter to a head and trigger the compulsory arbitration provisions of the Fair Work act.

This mess was created when the government abolished ‘Work Choices’ which allowed employers to negotiate directly with employees with individual contracts, and empowered the unions under Fair Work Australia. This allows unions to take ‘protected industrial action’ and limits employers right to respond.

By taking this action, Joyce lost little as far as the airline was concerned; it was already suffering to no good purpose already because of union action. It not only forced intervention, but necessitated the government to argue on the side of QANTAS against its union mates for the dispute to be terminated rather than suspended. Gillard has been embarrassed to the point where she has had to try to blame Abbott for it, (beats me too) and claim that QANTAS didn’t let her know what was going on, prompting this response from Senator Barnaby Joyce; (no relation)

The Qantas chief, Alan Joyce, has been hanging around Parliament House for the past few weeks, not because of an impending aviation calamity, but apparently because he likes the decor and the coffee. Well, that is what you would have to believe if you are to believe the Government.

To say the Qantas lockout and fallout came as a surprise does not pass muster especially now in light of the abundant leaks from key Labor Party ministers, all protecting their jobs in the shadow of this fiasco, so as to quarantine themselves from the political fallout in the rumoured leadership change.

Julia Gillard wrote the Fair Work Act when she was Industrial Relations Minister in 2009. Section 431 allows the minister to demand the parties come to the table and avoid the massive damage which has happened to the nation's airline and our nation's image. The Government had at its disposal the mechanism to avoid the travel chaos over the weekend. However, Gillard was not convinced of her own competencies in writing the Act or her Government's capacity in administration of her own Act. She claims that section 431 could not be used because it has not been used before. Well, why did you put it there? It appears she did not even source legal advice until Saturday afternoon. Breathtaking!

Our nation's Government is not on auto pilot - it is rudderless, clueless and hopeless. The Qantas dispute is a metaphor for the Government's day-to-day management as we lurch from crisis to crisis. It is the same management style as the live cattle debacle which brought about a middle-of-the-night closure of the live cattle trade that we did not need while creating an immense diplomatic issue with our largest neighbour. …

… In a political team when it becomes apparent that the halfback cannot pass, the five-eighth cannot catch and the coach is a plant from another greener team, then the crowd of supporters dismally dwindles to a core of the loving family members, the morbidly curious and those recently removed from the closest pub.

Tragically for Australia, the opposition under Tony Abbott is, despite holding the whip hand as far as polling is concerned, is too timid to offer any alternative to Labor’s return to the bad old days of union dominated industrial relations. In response to calls to introduce individual contracts again, he has been proven to be so terrified of doing anything, which may cause the term “Work Choices” to be mentioned, he has guaranteed that he will do nothing.

If ever a party was in a position to offer the public a courageous vision of the future, Abbott and the Liberals are in it. Unfortunately, they are too chicken shit to rock the boat.

This leaves the Liberal Democratic Party, LDP as the only party in this country that favors a deregulated and free labour market.