Speaker change, a Labor dirty deal but may save money. 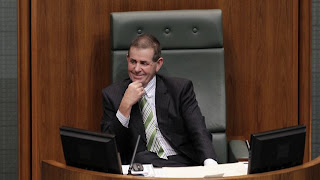 Image: Peter Slipper in his new role. His sellout will give him a bigger salary, more super, and removal next election. His half year expenses were nearly $415,000 last year. Picture: Ray Strange Source: The Australian

The possibility of Labor prevailing on its Speaker on the House of Representatives, Harry Jenkins to resign and be replaced by Liberal Party member, Peter Slipper has long been discussed as a method of strengthening the minority government. Now it appears they have gone ahead with it. Jenkins resigned this morning and it appears Slipper will be Labor’s nominee.

This effectively gives Labor another voting member on the floor of the House, and the Liberals one less. Peter Slipper, who is a dead man walking politically as he is about to lose preselection for his safe Liberal seat, has been the subject of considerable controversy within the party and his region owing to extravagant expenses. He also went against the wishes of the party to accept the Deputy Speaker role:

Both sides expect an election for speaker within hours and Peter Slipper to be the endorsed candidate of the Labor Party. The Coalition has formally been informed Mr Slipper is standing as speaker. It has resolved not to run a Coalition candidate for the post, ensuring Mr Slipper’s election.

Mr Slipper is expected to resign from the party, after a series of internal wrangles, to enable him to become speaker.

Sources said Mr Jenkins visited Ms Gillard in her office at 7.30am today where his resignation was discussed. The Prime Minister the contacted Leader of the House Anthony Albanese, who spoke to Mr Slipper about 8.30am. It’s understood Mr Slipper agreed to be Labor’s candidate for the post, after which Mr Albanese called a meeting of caucus.

Ironically this deal may save a great deal of the money spent wildly on a daily to weekly basis to placate the independents who are needed to drag the festering carcass of the government over the line in passing legislation. The amounts involved are huge; the deal with Tony Windsor alone cost $200 million to pass the mining tax. The deal with the Greens to make up for what was promised to get Wilkie’s vote cost Australians the chance for cheaper mortgage rates.

This is not out of the ordinary in the life of this government, or at least what passes for one. The dell with Wilkie, Oakeshott, and Windsor to allow Labor to form a government, involved running out the NBN to their electorates first, denying them the opportunity to run it through more profitable areas first, thus costing millions down the track. It has to be said though, that with the low take-up rate for the NBN, a bad idea whose time has passed, means that it probably makes little difference in the long run.

The change of speaker effectively gives Labor another vote on the floor, against one less for the Liberals. This means for the independents that their day in the sun is effectively over, or at least that their influence is greatly reduced. Wilkie for example had ‘the power of one’ which he exercised in order to get the unpopular poker machine legislation on the agenda. Prior to now he had the power to bring down the government in his own right, now he is irrelevant, unless Windsor and Oakeshott get stroppy.

Labor can be pretty confidant that Wilkie will not vote with Abbott on anything much anyway.

The Greens are still in a position to cause a lot of grief but in the long run a more secure Labor majority may mean a lowering of the ‘deal costs.’ It may however make the independents a bit less reliable for the government in future.