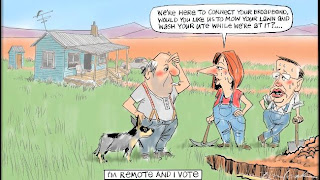 When the then opposition leader Kevin Rudd came up with the concept of a national broadband network, it was supposed to be the savior of the nation. It caught the imagination of the electorate, with its promise of ultra high-speed service, allowing uses in telecommunications and medical services that were to be the envy of the world despite the heavy price tag which was not talked about to any great degree.

The government was solidly on the back foot and rushed to catch up with its own scheme. It worked its way into the Australian psyche as the new sacred cow of the future. After the last election, promises of early rollouts in the electorates of the independents were part of the deal that delivered minority government to Gillard.

The problem is that for all the enthusiasm for the concept, the reality of it is of little interest to those who have the chance to take it up:

NBN Co has confirmed that the $36 billion network - which so far passes about 18,000 homes - has attracted about 2000 paying customers nationally, representing a connection rate of about 11 per cent.

The Weekend Australian can reveal that internal NBN Co figures from mid-October show the take-up rate has been as low as one in 50 homes at Armidale in Mr Windsor's NSW seat of New England, where Julia Gillard, Communications Minister Stephen Conroy and NBN Co chief executive Mike Quigley launched the first mainland NBN service in a ceremony that cost taxpayers $138,000.

The low take-up rates emerged as one of the nation's most respected business figures, Optus chief executive Paul O'Sullivan, called for a cap on price rises by NBN Co to encourage consumers to take up the NBN. Mr O'Sullivan warned that NBN Co would probably become one of the most powerful monopolies the nation had seen, and said it must be curbed by tough regulatory measures including Reserve Bank-style requirements to publish board minutes.

Take-up rate figures obtained by The Weekend Australian show that, on the mainland, Willunga in South Australia had the highest rate of active connections in mid-October at 18.5 per cent. This was followed by Kiama in NSW at 9 per cent, while Victoria's inner-city suburb of Brunswick has only reached 5.5 per cent take-up and Townsville comes in at 5 per cent. …

This is a disastrous result made worse by the deals with independents, which resulted in the rollout being diverted into areas more sparsely populated and less commercially viable, ahead of more profitable regions that could have generated some cash flow to offset costs. It makes little difference though if the majority of customers don’t want it, but the government is attempting to put a positive spin on it:

NBN Co yesterday defended the nationwide 11 per cent connection rate, saying it was still early days and that "the overall data on take-up should be generally illustrative of initial interest." Spokeswoman Rhonda Griffin said NBN Co was "extremely pleased" with the take-up. The project came out of trial mode only early last month, she said, and not all the existing telephone and internet service providers operating on the NBN had begun to offer plans in the market.

NBN Co said it had expected the initial take-up would be modest because most consumers remained locked into long-term internet contracts with their existing providers.

A spokesman for Senator Conroy said the take-up rates were no longer a relevant issue. "People need to finish their existing retail contracts now before they migrate over to the NBN," the spokesman said. "But eventually because of the Telstra deal all of its customers will be migrated over to the NBN.”

The internet has been around for years and there would not be a huge proportion of users on ‘initial’ or ‘long term’ contracts. Many people are moving to mobile connections in this day and age, and NBN may turn out to be an expensive rollout of a redundant system. One of the selling points was that the government would provide what the private sector would not. Perhaps there is a damn good reason for the reluctance of the private sector.