Media bias and bastardry and Republican cowardice deny the US a great candidate. 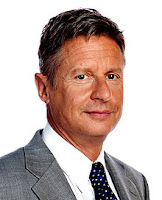 Any avid reader of the Ruidoso News is by now aware that the former two term New Mexico Governor, Gary Johnson is standing for the Republican Presidential nomination. Unfortunately, apart from a couple of passing references in the Adderville Examiner and a fairly positive Op-Ed in the Galts Gulch Gazette there has been little media coverage of his candidacy. The media has in the main staged a lockout.

While it is unreasonable to expect candidacy to automatically entitle anyone to inclusion in media coverage and a place in the debates, a candidate who meets the requirements should not be excluded. This is what has been done to Johnson. In May CNN blocked him from a debate in New Hampshire, although he qualified as an announced candidate with 2 percent support in three national polls during the month.

Despite being even in polls with Herman Cain and ahead of Jon Huntsman and Rick Santorum he was excluded from other debates, which included them. Since then it has been standard practice to omit him from the polls that decide places in the debates. With his campaign now faltering, it seems that media bias and bastardry has denied America a candidate who has the track record and principles to revitalize the nation.

The most disturbing aspect to this whole affair has been the silence of the Republican Party in the face of it. By remaining mute in the face of this outrage, the establishment wing of the party has essentially abrogated its responsibility to ensure that the party’s credible candidates get a fair go. Worse still, they are allowing the mainstream media to select their nominee by default.

This of course suits the business as usual crowd of Washington Establishment Republicans who have no interest in seeing any change to the status quo in case they become victims of it. There are numerous reports of efforts by the party machine to ensure that only the ‘right people’ get up. Recently this came from Bawb, a Montana man:

The Montana GOP has figured out a way to take the rank and file voters out of the loop in our state's primary election. In February, they have a "special" primary, in which only 1,100 specially selected party faithful statewide are allowed to vote. Then, in June, us peasants may vote, after the party candidate has already long since been selected.

They do have "public meetings" before the Feb. vote. We went to ours in '08. Three or four people spoke up for Ron Paul, one for Romney, and one Romney person who endorsed no one but gave a well-thought-out and impassioned speech against McCain.

Then the small unit of establishment-picked party faithful went behind the curtain to vote and lo and behold John McCain swept our county with more votes than all the other candidates combined. Go figure.

The GOP caught a lot of flak over that, especially in the newspaper editorials (my letter to state GOP headquarters went unanswered), but the furor eventually died down and the Party Machine kept the whole crooked mess in place. Mission accomplished. The people's input negated.

By allowing this sort of action to go unchallenged, the Republicans are shooting themselves in the foot in much the same way as the Liberal Party are doing here. Allowing the establishment to simply remain doing the same old thing as has been done before is a guarantee of inertia and eventual collapse. In the US the Republicans are acting as Democrat Lite, in much the same way as the Liberals here are trying to be Labor Lite.

If these parties remain terrified of new blood and new ideas to challenge that which has gone before, they are going to have to rely on winning through their opponents screwing up, which is likely but not guaranteed. What is not guaranteed is that the GOP or the Liberal Party would make much of a difference if elected.

Both opposition parties, here and in the US should be embracing their time in the back paddock accompanied by the unpopularity of both governments, as a chance to renew, revitalize, and come up with an exciting new vision that will catch the imagination of the electorate.