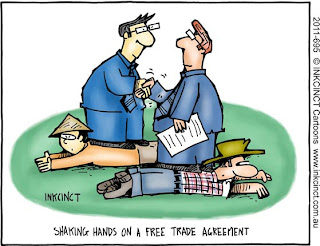 Ben Packham of the Australian seems to be a little confused as to what constitutes a split between the Liberals and Nationals in the opposition coalition parties. Either that or he is simply regurgitating the political spin of Trade Minister Craig Emerson. The Prime minister has announced the possibility of a Pacific free trade agreement between nine countries.

The opposition trade spokesperson, Julie Bishop has welcomed the effort to attain this. At the same time Senator Barnaby Joyce from the Nationals has tossed cold water on the deal, not because he is against such deals, but because he maintains that such deals normally tend to leave agricultural products out. He is correct in this assertion; the deal between Australia and the US dealt our sugar industry out.

It is difficult to view this as a split between the parties without the help of some serious spin doctoring. On one hand you have a party saying it’s a good idea, and on the other you have the other party saying that agricultural produce has to be included. Some split:

Senator Joyce questioned the ability of US President Barack Obama to deliver a deal that benefited Australian farmers at the expense of his own. "I don't think Barack Obama is going to be telling the mid-west he's going to hurt trade,'' he said.

Barnaby is quite correct in his assessment of this. The agricultural lobby in the US is powerful and Obama is weak. The Japanese who appear to be involved have a tariff barrier of over 700% on rice to protect their farmers. There is little doubt that extreme pressure will occur to prevent any roll back of these protections or the subsidisation surrounding them.

The proposal is a good one, but our primary producers must not be thrown under the bus to make it happen for the umteenth time.