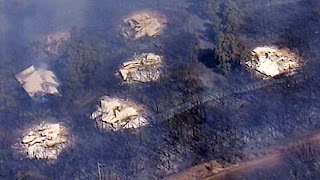 Image: Some of the aftermath of the WA DEC burnoff.

The recent escape of a controlled burn in Western Australia burned out thousands of hectares of land and has destroyed thirty-nine homes. The burn was ordered by the Department of Environment and Conservation, in a national park as a fuel reduction measure. The fire is now under control but not out.

While there is incredulity that the department would order a fire during summer with hot days and high winds forecast, it has now been revealed that one of the officers who ordered the burn was ruled incompetent by a coronial inquest into the deaths of three truckies who were incinerated when a road was prematurely opened:

A government official who approved the prescribed burn that led to the destructive Margaret River bushfire was labelled extremely incompetent and stood down over the fire deaths of three truck drivers in 2007, before being reinstated. …

WA Coroner Alastair Hope found Mr Commins and two other DEC officers had failed to consider key weather information when they approved the reopening of a road when a bushfire was burning in the Boorabbin National Park in WA's Goldfields region in December 2007. “This constituted extreme incompetence,” Mr Hope found in the inquest into the deaths.

Mr Commins stood down from his DEC post after the inquest but was reinstated last year by the department's Director-General Keiran McNamara, who has said he stands by that decision. The DEC has confirmed Brad Commins approved the prescribed burn, along with other senior fire officers, at Leeuwin-Naturaliste National Park near Margaret River in September.

Meanwhile a farmer has been jailed for contempt of court over dozing firebreaks after a stop clearing court order at the behest of the same department. While court orders are not to be ignored there is a special irony in this one owing to the fact some farmers have had to take the department to court in order to obtain permission to make firebreaks:

"The DEC brought the action and they claim you can't touch any country even though you own it.” Mr Rogers said Mr Szulc argued that he had already cleared the land in 1984 and that he was only clearing re-growth when putting in a 20-metre wide fire break he thought necessary to prevent a fire hazard after the injunction.

"The DEC claimed it was pristine bushland, but it was not original bushland," Mr Rogers said. In a letter to Farm Weekly in June, Mr Szulc said the DEC was out of control.

"Some of their area managers are making disastrous decisions affecting lives, public safety, the environment, native and introduced animals and birds. The DEC lights fires in summer time, which have a habit of getting out of control, causing massive palls of smoke to the detriment of public health.

Mr Szulc pointed out that having the DEC manage land clearing applications was a conflict of interest:

"In the past, senior departmental staff have been quoted as saying that there should be no more land clearing. It seems that this attitude is still current as applications by farmers are rarely granted. If an individual appeals the refusal the action is held up for unexpected lengthy periods. Private property rights mean nothing to the department.”

Pastoralists and Graziers Association (PGA) private property rights policy director Milan Zaklan said under legislation farmers could re-clear land if it had been done within 10 years of the original clearing. But if they were one day over 10 years they could be prosecuted.

The rules and regulations, which cover what landowners may do on their properties, are even now, growing exponentially along with constant exploration by bureaucrats to expand the parameters of the powers conferred on them by such legislation. These actions create considerable sovereign risk to agriculture in this country, and are creating the situation whereby landholders are being reduced to serfdom under the overlords of the state.