CSG companies slammed and deservedly so. 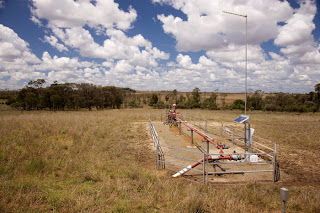 Last week former BHP chief geologist and current chairman of small uranium company Toro Energy, Dr Erica Smyth delivered a scathing assessment of some Coal seam gas explorers and their behavior. While delivering the 37th annual Essington Lewis Memorial Lecture in Adelaide, she referred to some of the newcomers to the industry as rogues who are acting irresponsibly.

The mineral exploration industry has been around in this country for most of our post British settlement history and has come to place a high priority on having good relations with property owners. The high handed attitude of CSG companies is likely to sour relations with mining companies who have consistently done the right thing. Dr Smyth is absolutely correct in saying that the onshore gas industry "urgently needs a set of guidelines and for newcomers to abide by them.''

The former BHP chief geologist and current chairman of uranium minnow Toro Energy said that unlike Santos, which had been mining coal bed methane for 50 years, the latest explorers were behaving irresponsibly.

"There are many newcomers who I call rogues,'' Dr Smyth said. "How can you just rock up onto someone's land and drill a hole without even asking and without even shutting the gates?''

In delivering the 37th annual Essington Lewis Memorial Lecture in Adelaide last night (Friday), Dr Smyth said the onshore gas industry "urgently needs a set of guidelines and for newcomers to abide by them''.

"These guidelines also need to address the access protocols for the drilling of thousands of wells and how the many low pressure gas pipelines, which will be needed to gather the gas from these wells, will be positioned to minimise the inconvenience to locals.''

Dr Smyth said the relationship between farmers and onshore gas producers could be repaired with community forums and pre-agreed protocols.

"But this needs to be done in consultation and with no surprises,'' Dr Smyth said.

This situation has occurred because of the government’s decision that the CSG industry is of national importance and has therefore allowed the needs for revenue to trump the property rights of farmers. The inevitable result is that while long established companies abide by best practice, the Johnny Come Lately’s have formed with a sense of entitlement, which includes a belief that they can treat landholders with disdain.

People involved in mineral drilling tend to be acutely aware of the need for good relations with landholders, who are in the main, not hard to get along with. All it requires is a bit of courtesy, respect, and cooperation in avoiding getting in the way of their management practices. It is not that hard and it doesn't take Einstein to work it out.