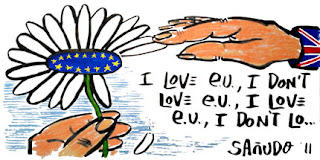 It is difficult to think of any British political leader, left, right, or whatever the hell they call the middle over there, who has not campaigned as a Euro sceptic, only to reverse course later. It’s almost like they think the public will support leaving Europe while they are in opposition, only to realise that the electorate cannot do without all of those directives coming out of Brussels, once in power.

There is another theory that might explain this phenomenon though. There is the possibility that those directives provide the sort of powers loved by politicians on both sides of the divide. By having them created by the European parliament and bureaucracy, British authorities get what they crave yet are able to deflect the blame to those pricks in head office.

PM David Cameron has broken the mould to some extent by claiming to ‘seek powers back’ while in a position to do so. Unfortunately this seems to be a ploy to bet some concessions from the Europeans before slipping back into good little Europhile when it suits him:

The Prime Minister said that the chaos in the eurozone presented Britain with the chance to begin loosening its ties with Brussels. "Change brings opportunities," he said, striking a sceptic tone in the annual foreign policy address to the Lord Mayor's Banquet. "An opportunity, in Britain's case, for powers to ebb back instead of flow away.” …

Mr Cameron used last night's speech to talk of "we sceptics" being right to question "grand plans and Utopian visions."

He is to spend the next three weeks lobbying European leaders to exempt the City of London from a raft of new directives from Brussels as the price of his support for any treaty change to strengthen fiscal ties within the eurozone. The Prime Minister will make whistlestop visits to Berlin and a number of other capitals.

It is possible that the exemption of the city of London is an effort to minimize the damage expected from a proposed financial transactions tax to help deal with the debt crisis. Such a move has been reported as likely to disproportionately affect the market there.

There is little doubt that Cameron would not wish to pull out of Europe. Were he to do so, a certain popular British Conservative MEP might on finding himself redundant, choose to seek a career in politics at home, which could cause discomfort among any number of career politicians at home.