The Greens get it in the neck on gas figures.

Watch for, “Paid for by the CSG interests.” 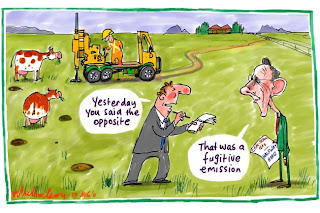 The Greens with their ideological commitment to 100% ‘renewable’ energy have been determined to shut down the coal industry, and are doing their best to prevent the production of gas. Favouring heavily subsidised uneconomic solar and environmentally destructive Chinese windmills to traditional energy production, they dispute the benefits of gas-fired generation.

Now a new report has come out which indicates that generating power from gas produces up to 87% less emissions than by coal. These figures give the lie to claims by Big Eco that benefits of such a transition are marginal; in essence giving it to them, right where the chicken got the axe:

The findings have provoked charges of hypocrisy against the Greens for opposing CSG exploration and production, while urging immediate action to reduce greenhouse gas emissions that contribute to climate change.

The report by global engineering consultancy WorleyParsons compares greenhouse gas emissions associated with Chinese power generators using Australian liquefied natural gas derived from CSG with those using imported black coal. It compares the gas and coal technologies across their entire "life cycle" - from extraction, to processing, to transportation and then power generation.

The report concludes: "CSG is significantly less greenhouse gas-intensive for most existing, commonly employed, end-user combustion technologies and for most of the life-cycle scenarios considered.”

The report, which will be officially released today, was commissioned by the Australian Petroleum Production and Exploration Association, an industry lobby. It concedes extraction of CSG carries higher emissions than extraction of coal but says this is more than compensated by the cleaner burning properties of gas.

As a result, 4.3 tonnes of global carbon emissions are avoided for every tonne of carbon produced in CSG-LNG production and use when gas is used instead of coal in a Chinese power station.

We can reasonably expect Green attacks on this study to be based on its origins, that is that it is funded by the Australian Petroleum Production and Exploration Association, rather than by grants from the ‘unbiased’ Department of Climate Change. This ignores the fact that a global engineering consultancy could not afford the damage that would be done to its reputation by releasing shonky figures.

Big Eco will also attempt to use its own shonky figures:

A peer-reviewed paper by University of Adelaide climate scientist Tom Wigley, published in August, said while gas-fired power production produces about half as much carbon as coal, the difference becomes negligible "where a percentage of the gas production is assumed to leak into the atmosphere."

However, the WorleyParsons study found coal could compete with gas on greenhouse emissions only when the cleanest coal technology was compared with the dirtiest gas-fired plant. On average, compared with three progressively more efficient forms of coal-fired power, electricity produced by state-of-the-art gas generation was 87 per cent, 51 per cent and 43 per cent cleaner, across the fuels' life cycles.

Interestingly, those reductions by China using our gas, can probably be turned into ‘carbon credits’ which we can then buy off them to offset our emissions which the Greens insist should not be minimized by using our own gas here, go figure.

Senators Milne and Brown did not respond to questions from The Australian last night.