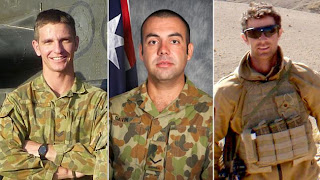 The news that a rogue Afghan soldier had opened fire on a group of Australian mentoring troops, killing three and wounding another seven was shocking enough to start with, but one of those killed was from Gympie, my home town. He was Corporal Ashley Birt, whose brother is serving there as well and will accompany him home.

I have not met him or his family, (I work away a lot) but while every death there is the loss of one of our own, this brings it that much closer. Currently, three of my family members are in the forces with one serving over there.

MTF-3 commander Lt-Col Chris Smith said the soldiers from 2nd Royal Australian Regiment had been standing with interpreters after the parade. They were all hit from behind.

"A member of the ANA - we think it's a junior officer or a senior non-commissioned officer - came up with a machinegun, came up to within 20 metres or 15 metres of our soldiers, and opened fire on them. There were 12 Australians in the group and all but two were struck," he said.

The surviving Diggers in the training team, including some of the wounded, returned fire and the Afghan soldier was killed. One of the wounded, a medic, paused only to apply a tourniquet to stop himself bleeding before rushing to the rescue of his comrades.

At that stage, with their platoon commander dead, the Diggers faced they possibility that the other Afghan soldiers could start shooting or that Taliban forces were outside the base and preparing to attack. The alarm went out and a strong Australian mobile patrol operating nearby in armoured vehicles swept down into the base to back up the Australians and to reinforce security.

The most disturbing aspect of this, the second such attack by members of the Afghan National Army on our mentoring troops, is that the perpetrator has been serving for three years without coming under suspicion. The reason for the attack may never be known, but it has to be of deep concern that at short notice, a trusted ally can turn deadly to the very people doing their best to assist him in defending his country.

Our deepest sympathies go to his family and those of the other soldiers lost in this attack.