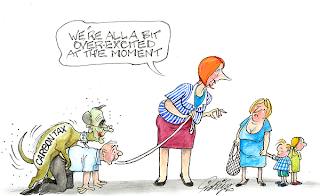 
As seen below, the carbon tax passed the Senate vote today, something that was always going to happen after the House of Representatives, (something of a misnomer at present) passed it. A bill that is opposed by 60+% of the population was rammed through by a minority government out of desperation for Green support.

This tax will do nothing to cool the planet, nor will it stampede the Chinese and Indians into doing the same. These countries are run by relatively sane people and are unlikely to emulate the mistakes of Australia.

Interestingly, during the press conference held by the Nationals one of the Canberra press gallery asked Barnaby Joyce if it would be best to just concede defeat on the issue. That’s a little like asking Labor why they repealed Work Choices rather than accepting it:

BARNABY JOYCE – We will take a few questions and I know you have quite a few people to talk to and you have also got a storm coming, not that I would be too worried about raining on the Greens' parade, so to speak.

BARNABY JOYCE – No it’s not, absolutely not, our people would hold us in absolute contempt if we were step back from the battle that is before us. We will absolutely, excuse the operatics; "gird our loins" because we are going to make sure this is taken to the election. The Australian people have a right to have a referendum on this, it is still coming, it is the election and at the election they will have the chance to have their say as to whether our nation should be run by the Australian Greens or run by the Australian people, as to whether we should be guided by Al Gore or guided by the promises our Prime Minister makes.

The opposition has given an undertaking to repeal this tax and have put the government on notice on this well before the tax was passed. There is no logical reason why they should surrender and allow this stupidity to continue.

The Canberra Press gallery which along with the Greens and Getup are the only friends Labor has left to them, should wake up to the fact that the next government has the right to undo what this government has inflicted.