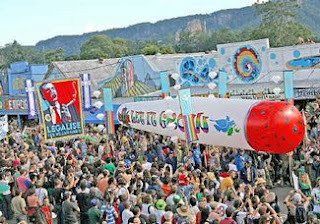 Help End Marijuana Prohibition (HEMP) have been refused permission to display their 30-foot long inflatable joint during protests aimed at President Obama who is visiting Canberra next week. Not only was their original plan, to present the iconic device to the President banned, but also there are plans to prevent its display during the visit.
Banning it is a blatant attack on freedom of speech and expression in this country. While the idea of offering it to President Obama is somewhat over the top and would raise security concerns, there is no credible reason why a giant inflatable joint should be prohibited from being displayed. HEMP has a right to campaign for the legalization of the product just as any other group has for their issues. 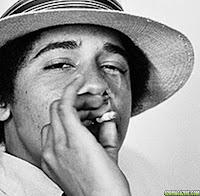 Image: President Obama, Drug warrior.
Obama, like George W Bush and Bill Clinton has used marijuana. Unlike his predecessors, he advocated reform of the law prior to becoming President only to become a strident drug war warrior afterward, including a campaign against medical use in states where this is legal. Current polls indicate that 50% of Americans now support legalization of pot, a figure that substantially beats the President's own approval figures.
Apart from the futility of attempting to prohibit the use of such a popular and easily produced product, there are numerous therapeutic uses for it including pain relief. GOP Presidential candidate and former New Mexico Governor Gary Johnson, supports such use after having used it for pain relief for three years after a paragliding accident caused him multiple bone fractures, including a burst fracture to his T12 vertebrae:

“But for luck, I guess, I wasn’t arrested.” Although smoking marijuana for medicinal purposes was illegal in New Mexico until 2007, Johnson says he needed the drug following a 2005 paragliding accident in Hawaii. His sails got caught in a tree, he stalled—and fell about fifty feet straight down to the ground, he says. Johnson suffered multiple bone fractures, including a burst fracture to his T12 vertebrae. “In my human experience, it’s the worst pain I’ve ever felt.”

“Rather than using painkillers, which I have used on occasion before, I did smoke pot, as a result of having broken my back, blowing out both of my knees, breaking ribs, really taking about three years to recover,” Johnson says. He explains that painkillers had once caused him to suffer nasty side effects and the pain of withdrawing from the pills was unbearable. So, Johnson says, in 2005 "someone who cared" for him gave him marijuana to deal with the pain.

Parents need to take responsibility for educating children on the dangers of drugs, not leave them to find out from teachers, peers who may think its cool, or rely on the police force to prevent them trying it out. Prohibition not only fails to protect, but creates the situation whereby kids experimenting with a relatively harmless substance end up with a lifetime criminal record if caught.