Minority government descends into a circus over mining tax. 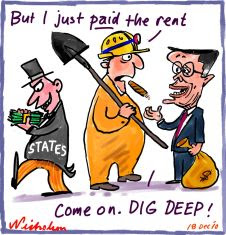 If any Australian is in any doubt that the current government is unworkable, they just have to take a look at the follies surrounding the passage of the mining tax. A rerun of the now standard ‘You scratch my back, I’ll scratch yours’ has been going on for a while on this one between the government, independents, and the greens in order to drag it across the line.

The system seems to do constant replays of the same scenario whereby; the government puts up a proposal, Wilkie, Winsor and Oakeshott claim they can’t possibly agree to it, Gillard holding urgent talks with them, then to the surprise and delight of everyone in the parliamentary press gallery they agree as long as a hell of a lot of money is spent on their favorite obsessions.

The independents have secured a $200 million program to examine environmental concerns over coal seam gas mining and an increase in the tax threshold from $50 million to $75 million for small companies. But the passage of the bill is by no means assured.

The Greens, who have threatened to block the legislation if the tax threshold is increased, are insisting the foregone revenue of $20 million a year be made up by other means.

However the support of the independents is a big boost to Julia Gillard's Government, which is trying to get the tax through the Lower House before Parliament rises for the year on Thursday. It has been buoyed by Labor Party-commissioned research showing 56 per cent of people do not think average Australians are benefiting from the resources boom.

ABC reports are always very optimistic for the government but the fact that 56% of people do not think average Australians are benefiting from the resources boom is meaningless as in any boom some industry does well out of it while others miss out other than flow on effects. Meanwhile the Minerals Council of Australian is worried about red tape and duplication:

Chief executive Mitch Hooke said that if the deal worked as intended, the changes could add to the value of "an already rigorous project approvals process". He warned there was "a real risk of regulatory overburden and a potential quasi-moratorium on new coalmining projects" if the expert panel did not work within state approval timelines. "The commonwealth does not have the resources to carry out projects assessments on the scale required," he said. "The trigger could potentially delay projects for years as the commonwealth works through EPBC referrals and approvals, which largely duplicate existing state processes.”

But not to worry, the PM has announced she would create a special body of experts - the Independent Expert Scientific Committee. The possible reason for this is that there are now so many expert committees, that all of the good names have been used up. Senator Barnaby Joyce should have the final word here:

Well I have just watched my nation’s Parliament at work. Not in the Cabinet or the Chamber but in the Senate Courtyard rolling press conferences.

The result of the Mining Resource Rent Tax vote was that it was off because of some stumbling Windsor position on CSG when in reality, as he always does, he was going to rollover for Labor so as expected he had a chat then he changed his mind and it was back on, then Oakeshott said that he was sort of where Windsor was with something random about the Henry Tax Review, then Wilkie said it was on but different and then Bob Brown said it was off if Wilkie’s different position was on.

Yes we can run a country like this, this is totally politically sane. After another two years of this chaos the best we will be able to say about our government is that it is very entertaining.

Very similar to: What is your surgeon like? Well there are a fair few of them and they argue a lot about what they are going to cut off but they are very, very entertaining.

Thats pretty accurate when you come to think of it.