No one has noticed a new global warming crisis. 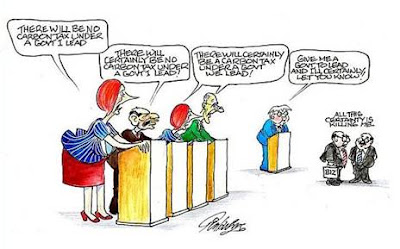 Cartoon: By Pickering.
From Viv Forbes, Chairman,
The Carbon Sense Coalition
Since July, temperatures in Australia have soared by over six degrees centigrade. If current trends continue, we can expect another three degrees of warming by Christmas.

This rapid warming has caused massive environmental disruption – alpine snow has melted, birds are migrating, there is an epidemic of weeds and we can expect more storms, cyclones, floods, mosquitoes and solar radiation burns.

This is far more serious than the UN's forecast of a piddling 1-2 degrees of warming over the next hundred years or so.

The old people called it "summer".

Summer heat is generated by a slight increase in the solar radiation received at the surface, caused by cyclic changes in the positions of the sun in the sky. It is obvious that longer term solar cycles also dominate the climate. Even "The Farmer's Almanac" knew that cycles in moon, planets and sunspots could be used to forecast the weather.

However, since people started to let computers do their thinking, knowledge of climate cycles has been lost. We now let computer nerds and taxaholics tell us that the climate is controlled by minute traces of a harmless invisible natural gas exhaled with every breath, generated in every bushfire and exhausted wherever coal, oil and gas are burned. Some even believe that a tax on carbon dioxide will cool the world.

It's time we abandoned climate Cassandras with costly computers. There was more sense in "The Farmer's Almanac".

And a Solar Tax on the sun to reduce warming makes as much sense as a Carbon Tax on the air to induce cooling.

Jo Nova reports: "At least 2,700 people are dying in Britain every year because they are unable to adequately heat their houses, according to the interim findings of a report commissioned by the Department of Energy and Climate Change (DECC)".

"With people dying from the cold because they can’t afford enough home heating, the government is deliberately raising heating costs in an attempt to make it slightly colder outside" - Tom Nelson

Then the Longannet Project in UK, the flagship scheme for carbon capture in the UK, was junked:

None of this is a surprise to us here at Carbon Sense:

Europe gets a case of the jitters about their unilateral targets:

G20 tells Gillard "You are on your own on carbon tax."